September 4, 2018adminAddiction
Some addicts are highly intelligent. They use this natural gift to ‘prove’ to themselves and others that they are not addicts. As with mediaeval monks discussing how many angels dance on the head of a pin, they argue over the precise nature of addiction until the cows come home. Intelligence doesn’t protect them from mental and behavioural stupidity. And mental health is not merely the absence of mental illness. Intelligent people are just as prone to mental illness and addiction as anyone else.
Other people are as thick as the proverbial two short planks. This does not lead to them being either accepted or rejected by other addicts in their surroundings. For many individuals their intellectual struggle and their addiction are just the way they are – without any direct connection between these two aspects of their lives.
A lack of emotional intelligence, an inability to learn from practical experience and take sensible action, is not directly connected with intellectual ability or its absence. But emotional instability is a common feature in all addicts. Unpredictable feelings can come out of nowhere and go all over the place.
When A (an action) directly and always leads to B (a specific end result) a simple cause is established. More complex, conditional, causes occur when C or D need to be present for A to lead to B. Background influences, X, Y and Z, may result in A leading to B more commonly than in other circumstances. Understanding concepts of causation and mathematical probability are functions of the intellect. If that skill were sufficient to prevent addiction, no intellectually clever people would ever become addicts. IQ tests should then demonstrate their invulnerability. But that is manifestly not the case.
But now let’s look at this the other way round. Hard core addicts of any kind – alcoholics, drug addicts, compulsive gamblers, sufferers from eating disorders, any of them and many more – eventually become utterly self-destructive. That isn’t very clever. Their alcoholism, drug abuse, drug addiction or compulsive behaviour of any kind steals their greatest assets – their capacity to reason and ponder – and turns them into tools for intellectual and social self-delusion.
‘Turn on, tune in, drop out’ was the exhortation of a highly intelligent man – Timothy Leary – but he took many members of the flower power generation down with him into intellectual oblivion when they turned to drugs. Substance abusers may believe they are exercising free will when they turn to drugs. The truth is the opposite. Addiction destroys free will. The fanciful musings of abusers and addicts are mentally bizarre. Their creativity is corrupted. Their youthful enthusiasm is diverted by drug use into cul-de-sacs of banality. Drug and alcohol use tended to make them indistinguishable from each other so that if you’ve seen one addict you’ve seen them all. The only feelings long term addicts are left with are blame and self-pity. They have no residual individual personality. Many of them need addiction treatment if they are to recapture any sense of hope, trust, honour, appreciation, innocence and beauty.
Oliver Wendell Holmes, one of the sharpest minds who ever lived, discovered the secret of the universe after inhaling ether: he said ‘A strong smell of turpentine prevails throughout’.
Aldous Huxley, another fine intellect, experimented with mescaline (first cousin to LSD) in order to open the doors of perception. He wrote that taking the drug led to ‘a gratuitous grace’ and that the person having this experience ‘will be transformed for the better’.
In 23 years running my inpatient treatment centre I worked with over 5,000 addicts of one kind or another. I do not recall any of their lives being transformed for the better by any addictive substance or process – other than temporarily in their own mental confusion.
One important study showing what addicts of any kind have in common demonstrated to us that having other addicts in their families was the most predictive factor in addiction. High intelligence, or the lack of it, was not a factor. Whatever the level of intelligence, the risks of addiction are the same.
But addicts like me are often too clever for our own good. We may have high levels of intellectual attainments but our intelligence can become an enemy rather than a friend. As suggested by Dr Bob, one of the co-founders of Alcoholics Anonymous, we need to ‘keep things simple’.
Summary 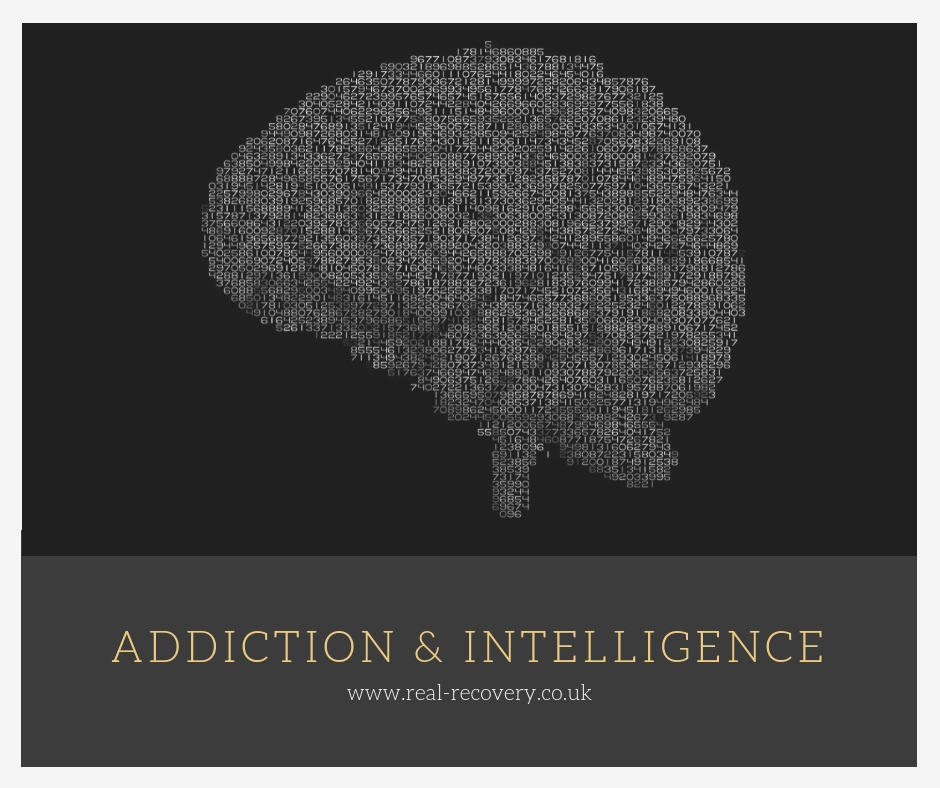 Article Name
Addiction & Intelligence
Description
Addiction is not a result of being clever or stupid. As with having red hair or coming from a sink estate, these may be associations but they are not causes. Neither intelligence nor stupidity lead to addiction. Nor are they preventive.
Author
Dr Robert Lefever
Publisher Name
Dr Robert Lefever - Real Recovery