When I first attended eating disorder groups I was often the only man. Nowadays, as in groups of alcoholics or narcotics users, the gender balance is even.
After something over 4,000 meetings, I’m completely comfortable talking about my eating disorder in front of anyone and even on tv. I would be just as comfortable talking about my osteoporosis or my short sight or my allergy to bee stings. These aspects of my genetic make-up are part of me. They’re not things that I feel ashamed about in any way.

By contrast, I feel guilty over many things that I have done in the past. I’m very selective over the people with whom I’m prepared to share those experiences. I have even learned not to trust all healthcare professionals. This is self-preservation rather than masculine reticence or British stiff upper lip.
So I don’t talk about my guilty secrets in eating disorder groups. I have no need to talk about personal issues. There is more than enough craziness in my eating disorder behaviour to show any meeting that I am a fully paid-up member of the addicts’ club. I’ve done the same bingeing and starving and all sorts of ill-advised and dangerous things that women do. I have an eating disorder and that’s that.
Even more importantly for me nowadays, I know what to do about my eating disorder on a day-to-day basis to maintain my abstinence and equanimity. And I can do that in the company of men or women or people with whatever gender assignment or non-assignment they choose.
I see my addictive nature as being a personal responsibility for me to manage each day, rather than as anything of any relevance to anyone else – provided that I do not harm them in any way.
My friend Lance happens to be anorexic. He also happens to be gay. Neither issue is any concern to me. I happen to share Lance’s general but not specific eating disorder. And I don’t happen to share his sexual proclivity. He has his way of personal expression and I have mine. Our commonality binds us together but our difference does not separate us.
I feel exactly that sense of commonality with women who have eating disorders. I’ve done the strange things they’ve done. I’ve shared the same hopes, fears and disappointments. I don’t even notice their gender when I’m in an eating disorder group. That’s how it needs to be if the group is to function for mutual benefit.
Anyway, men often make up 20-30% of the group nowadays so we don’t stand out as I did 30 and more years ago.
Men have the same cross-addictive compulsive behaviours as women. I used to shop for England rather than for things I needed. I spent money if I had it. I worked on projects I didn’t even want to do. Only in exercise was I untypical. I’m not a typical male in this respect. I loathe exercise. I do static exercises each morning just to keep my body in shape. I keep time by saying ‘I hate it. I hate it. I hate it’. But there are many men whose eating disorder comes out primarily in this way. They suppress it with manic activity. Then, when they stop, they balloon up. They had the eating disorder all along but it didn’t show.
The principles of dealing with an eating disorder are no different for men or women or anybody. That should be no surprise. We go to the same opticians and family doctors. To stereotype people with eating disorders by way of their gender would be daft. The issue of men with eating disorders simply isn’t an issue as far as I’m concerned.
But if there are men who would like to talk their eating disorder issues through with another man, here I am. Call me on 07540281820. 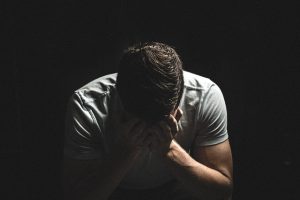